In this section, a power scenario is taken as an example to illustrate how to creat a correct data model in IoTDB. For convenience, a sample data file is attached for you to practise IoTDB.

According to the data attribute layers, it is expressed as an attribute hierarchy structure based on the coverage of attributes and the subordinate relationship between them, as shown below. The hierarchical from top to bottom is: power group layer - power plant layer - device layer - sensor layer. ROOT is the root node, and each node of sensor layer is a leaf node. In the process of using IoTDB, the attributes on the path from ROOT node is directly connected to each leaf node with ".", thus forming the name of a timeseries in IoTDB. For example, The left-most path in Figure 2.1 can generate a timeseries named root.ln.wf01.wt01.status. 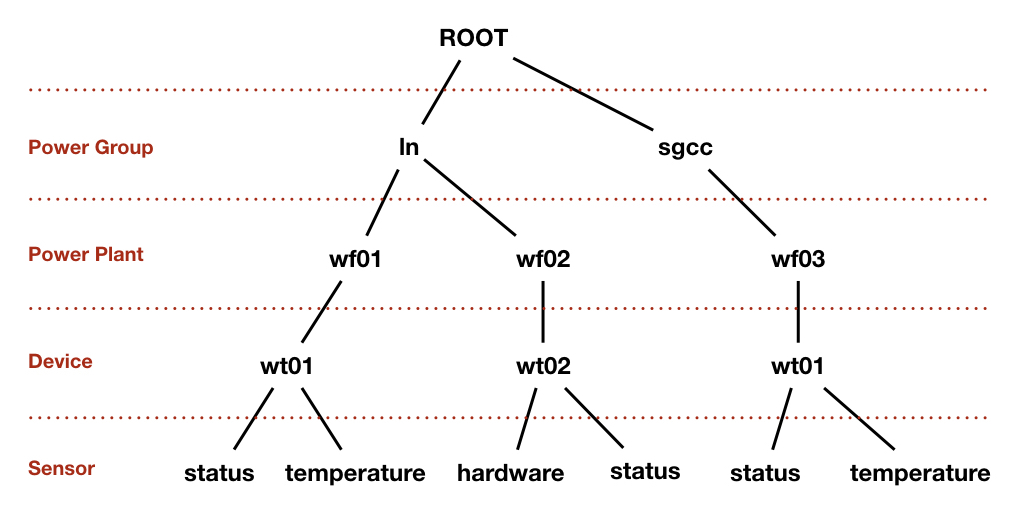 After getting the name of the timeseries, we need to set up the storage group according to the actual scenario and scale of the data. Because in the scenario of this chapter data is usually arrived in the unit of groups (i.e., data may be across electric fields and devices), in order to avoid frequent switch of IO when writing data, and meet the user's requirement of physical isolation of data in the unit of groups, storage group is set at the group layer.

Here are the basic concepts of the model involved in IoTDB:

A device is an installation equipped with sensors in real scenarios. In IoTDB, all sensors should have their corresponding devices.

A sensor is a detection equipment in an actual scene, which can sense the information to be measured, and can transform the sensed information into an electrical signal or other desired form of information output and send it to IoTDB. In IoTDB, all data and paths stored are organized in units of sensors.

Note: A full path (root.vehicle.d1.s1 as in the above example) is not allowed to be set as a storage group.

Setting a reasonable number of storage groups can lead to performance gains: there is neither the slowdown of the system due to frequent switching of IO (which will also take up a lot of memory and result in frequent memory-file switching) caused by too many storage files (or folders), nor the block of write commands caused by too few storage files (or folders) (which reduces concurrency).

Users should balance the storage group settings of storage files according to their own data size and usage scenarios to achieve better system performance. (There will be officially provided storage group scale and performance test reports in the future).

The Layer Name of storage group can only consist of characters, numbers, underscores and hyphen, like root.storagegroup_1-sg1.

In IoTDB, a path is an expression that conforms to the following constraints:

We call the middle part of a path between two "." as a layer, and thus root.A.B.C is a path with four layers.

It is worth noting that in the path, root is a reserved character, which is only allowed to appear at the beginning of the time series mentioned below. If root appears in other layers, it cannot be parsed and an error is reported.

Single quotes are not allowed in the path. If you want to use special characters such as "." in LayerName, use double quotes. For example, root.sg."d.1"."s.1".

The characters supported in LayerName without double quotes are as below:

Note: the LayerName of storage group can only be characters, numbers, underscores and hyphen.

Besides, if deploy on Windows system, the LayerName is case-insensitive, which means it's not allowed to set storage groups root.ln and root.LN at the same time.

For example, if device1 of the vehicle type has a sensor named sensor1, its timeseries path can be expressed as: root.vehicle.device1.sensor1. Double quotes can be nested with escape characters, e.g. root.sg.d1."s.\"t\"1".

Note: The layer of timeseries paths supported by the current IoTDB must be greater than or equal to four (it will be changed to two in the future).

In order to make it easier and faster to express multiple timeseries paths or prefix paths, IoTDB provides users with the path pith star. * can appear in any layer of the path. According to the position where * appears, the path with star can be divided into two types:

* appears at the end of the path;

* appears in the middle of the path;

When * appears in the middle of the path, it represents * itself, i.e., a layer. For example, root.vehicle.*.sensor1 represents a 4-layer path which is prefixed with root.vehicle and suffixed with sensor1.

Note1: * cannot be placed at the beginning of the path.

Note2: A path with * at the end has the same meaning as a prefix path, e.g., root.vehicle.* and root.vehicle is the same.

The timestamp is the time point at which data is produced. It includes absolute timestamps and relative timestamps

**The syntax of the custom time format**

Relative time refers to the time relative to the server time now() and DATETIME time.