A wind power IoT scenario is taken as an example to illustrate how to creat a correct data model in IoTDB.

According to the enterprise organization structure and equipment entity hierarchy, it is expressed as an attribute hierarchy structure, as shown below. The hierarchical from top to bottom is: power group layer - power plant layer - entity layer - measurement layer. ROOT is the root node, and each node of measurement layer is a leaf node. In the process of using IoTDB, the attributes on the path from ROOT node is directly connected to each leaf node with ".", thus forming the name of a timeseries in IoTDB. For example, The left-most path in Figure 2.1 can generate a timeseries named root.ln.wf01.wt01.status. 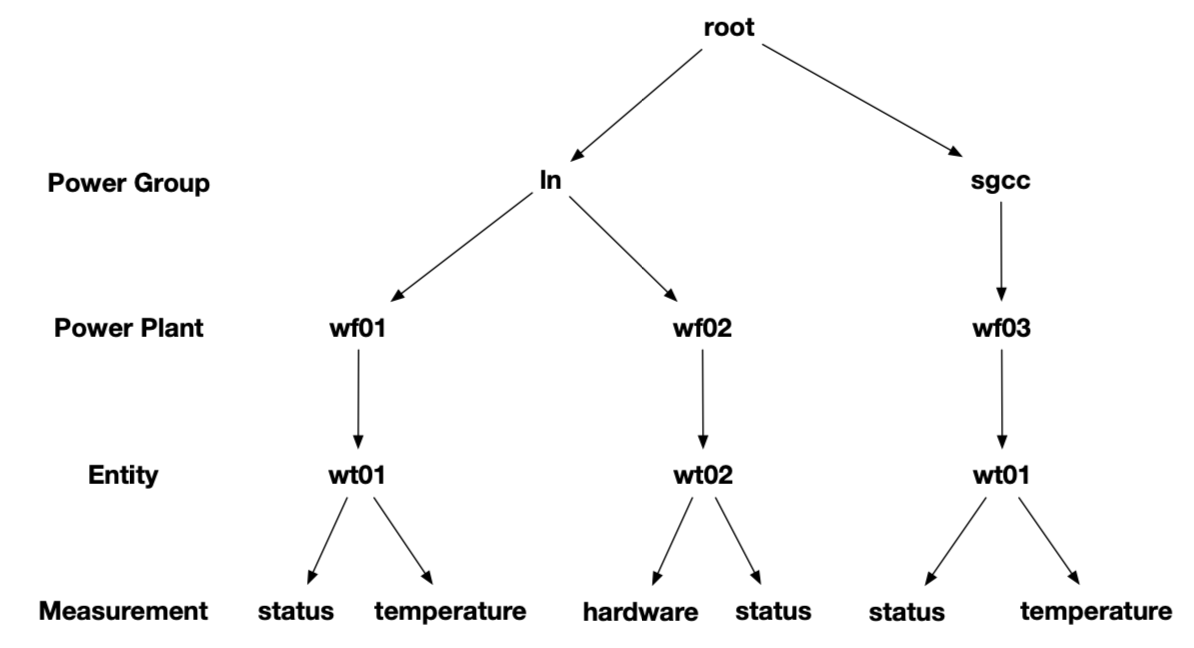 Here are the basic concepts of the model involved in IoTDB.

It is information measured by detection equipment in an actual scene and can transform the sensed information into an electrical signal or other desired form of information output and send it to IoTDB. In IoTDB, all data and paths stored are organized in units of measurements.

An entity is an equipped with measurements in real scenarios. In IoTDB, all measurements should have their corresponding entities.

A group of entities. Users can create any prefix path as a database. Provided that there are four timeseries root.ln.wf01.wt01.status, root.ln.wf01.wt01.temperature, root.ln.wf02.wt02.hardware, root.ln.wf02.wt02.status, two devices wt01, wt02 under the path root.ln may belong to the same owner or the same manufacturer, so d1 and d2 are closely related. At this point, the prefix path root.vehicle can be designated as a database, which will enable IoTDB to store all devices under it in the same folder. Newly added devices under root.ln will also belong to this database.

Note1: A full path (root.ln.wf01.wt01.status as in the above example) is not allowed to be set as a database.

Note2: The prefix of a timeseries must belong to a database. Before creating a timeseries, users must set which database the series belongs to. Only timeseries whose database is set can be persisted to disk.

Note3: The number of character in the path as database, including root., shall not exceed 64.

Once a prefix path is set as a database, the database settings cannot be changed.

The Layer Name of database can only consist of characters, numbers, and underscores, like root.storagegroup_1.

A path is an expression that conforms to the following constraints:

We call the part of a path divided by '.' as a node or nodeName. For example: root.a.b.c is a path with 4 nodes.

The following are the constraints on the nodeName:

In order to make it easier and faster to express multiple timeseries paths, IoTDB provides users with the path pattern. Users can construct a path pattern by using wildcard * and **. Wildcard can appear in any node of the path.

Note1: Wildcard * and ** cannot be placed at the beginning of the path.

The timestamp is the time point at which data is produced. It includes absolute timestamps and relative timestamps. For detailed description, please go to Data Type doc.

The record of a measurement of an entity on the time axis. Timeseries is a series of data points.

A measurement of an entity corresponds to a timeseries.

For example, if entity wt01 in power plant wf01 of power group ln has a measurement named status, its timeseries can be expressed as: root.ln.wf01.wt01.status.

There is a situation that multiple measurements of an entity are sampled simultaneously in practical applications, forming multiple timeseries with the same time column. Such a group of timeseries can be modeled as aligned timeseries in Apache IoTDB.

The timestamp columns of a group of aligned timeseries need to be stored only once in memory and disk when inserting data, instead of once per timeseries.

It would be best if you created a group of aligned timeseries at the same time.

When querying, you can query each timeseries separately.

When inserting data, it is allowed to insert null value in the aligned timeseries. 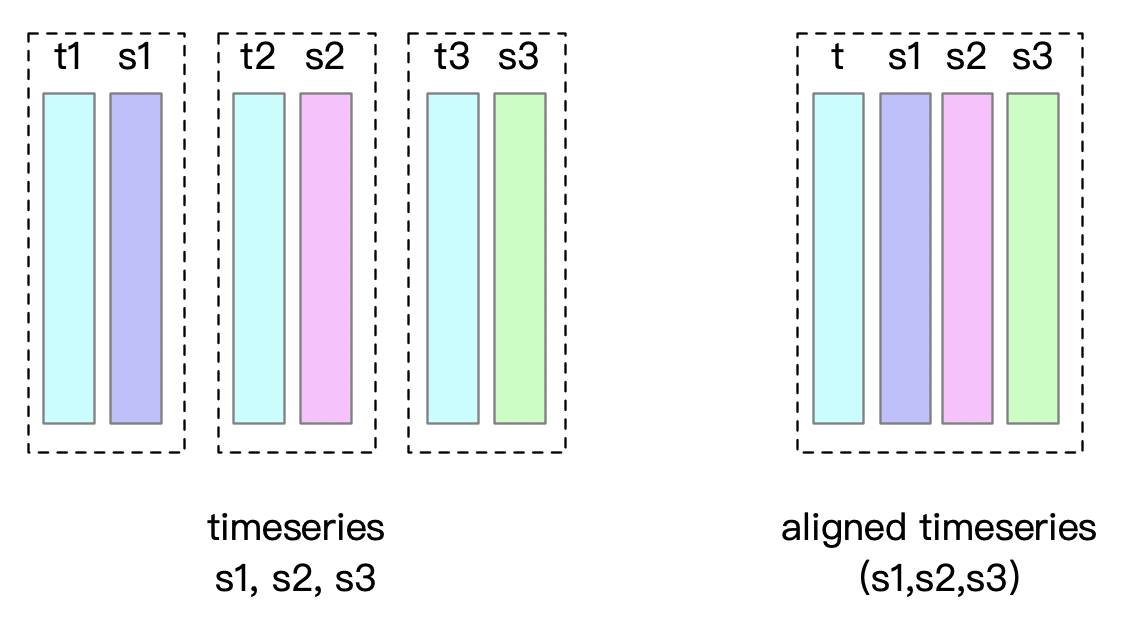 In the following chapters of data definition language, data operation language and Java Native Interface, various operations related to aligned timeseries will be introduced one by one.

In the following chapters of, data definition language, data operation language and Java Native Interface, various operations related to schema template will be introduced one by one.