The synchronization tool is a suite tool that periodically uploads the newly added persistent tsfile files on the local disk to the cloud and loads them into Apache IoTDB.

This document mainly introduces the requirements definition and module design of synchronization tools.

The requirements of synchronization tools are mainly the following:

The synchronization tool can be used to transfer and load data files between two Apache IoTDB instances. When network instability or downtime occurs, ensure that files can be completely and correctly transferred to the data center. 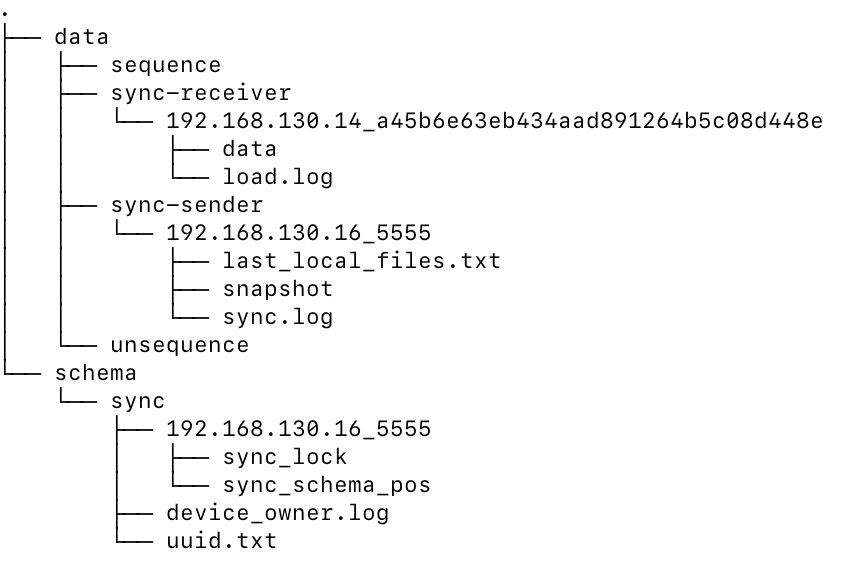 The sync-sender folder contains temporary files, status logs, etc. during the data synchronization when this node is used as the sender.

The sync-receiver folder contains temporary files, status logs, and so on during which the node receives data and loads it as a receiver.

The schema / sync folder holds the synchronization information that needs to be persisted.

data / sync-sender is the sender's folder. The folder name in this directory represents the IP and rpc port of the receiver. In this example, there is a receiver192.168.130.16: 5555. Each folder contains the following Several files:

sync-receiver is the folder of the receiving end. The folder name in this directory represents the IP and UUID of the sending end, and it indicates the data files and file loading logs received from the sending end. In this example, there is a sending end. 192.168.130.14, and its UUID isa45b6e63eb434aad891264b5c08d448e. Each folder contains the following files:

When receiving the notification of the end of the task of the file transfer module, execute the following command:

For each file path, call the file management module to obtain a list of deleted files and a list of newly added files, and then perform the following process:

The file transfer module is responsible for receiving the file name and file transmitted from the sender. The process is as follows:

For the file that needs to be loaded (example 15813214718762-101-1.tsfile), first use device_owner.log to check whether the file meets the application scenario, that is, whether the same device data is transmitted with other senders causing conflicts. , Then reject the loading and send an error message to the sender; otherwise, update the device_owner.log information.

After meeting the requirements of the application scenario, insert the file into the appropriate position in the sequence tsfile list and move the file to the data / sequence directory. After successful execution, record load 1581324718762-101-1.tsfile inload.log. After each file is loaded, check whether the sync.end file is included in the synchronized directory. If the file is included and the sequence folder is empty, delete the sync.log file, and then delete the load.log and sync.end files.

When the ApacheIoTDB system is started, each sub-folder under the sync folder is checked in turn, and each sub-file represents the synchronization task of the sender represented by the folder name. Perform a recovery algorithm based on the files in each subfolder:

At the beginning of each synchronization task, the receiving end checks and restores the corresponding subfolders.

Contact us: Join QQ Group 659990460 | Add friend tietouqiao and be invited to Wechat Group
see Join the community for more